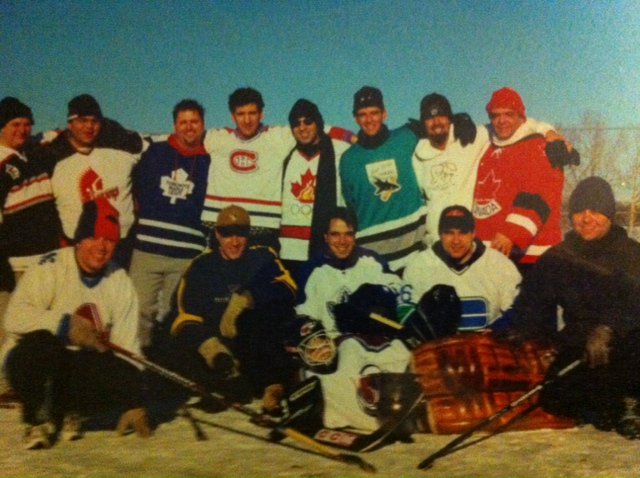 In 1977, four Greek-Canadian boys – all cousins ​​and sons of Greek immigrants to Canada – started a game of hockey in a front yard on Hochelaga Street in Moose Jaw, Saskatchewan and started a tradition that remains alive. today, connecting families together across generations.

The boys, from the Greco-Canadian families Lentzos, Kourles and Dimas, had fathers and mothers who made the extremely difficult decision to leave their homeland and travel 8,000 miles across the Atlantic, then thousands of miles to across the prairies of western Canada to make a new start for them and their families.

The annual match, played on Christmas Day and nicknamed “The Hochelaga Cup”, is now included in a new film of the same name, directed by Panayioti Yannitsos, another of the cousins.

It all started, says Stephan Lentzos, “with a little shinny game” in the front yard of rue Hochelaga. But hockey, of course, is more than that in Canada, where it runs in the blood of all Canadians.

“For us, it was about finding a way to assimilate ourselves, because even though we were born here, we were carriers of the culture and the ways” of Greece, explains Lentzos in the film.

He says, “This is, after all, just a hockey game. But it is much more than that. It was our way of trying to fit into “Canadiana”. And whether we realize it or not, that’s exactly what was happening.

“Our parents came from Greece at the end of the 1950s”, says his cousin Peter Lentzos, adding that “the economic opportunities at that time (in Greece) were not so good”.

Nick Kourles, another cousin, notes that at this time in Greece, “you would be fine if you could feed your family during the day.”

“When they came here they struggled”

Stephan Lentzos says, however, that the transition to life in Canada was not easy for any of the immigrants of that time. “You find yourself in a situation where you literally have nothing, your back is against a wall, it’s do or die.

Her cousin Peter explains: “Their life was a never-ending job. The working hours worked seven days a week. Stephan then adds, “So if you take that as a starting point, it’s amazing how far they ended up going. “

Nick Kourles remembers that “My dad, my aunts and uncles, they just took a chance. They traveled 8,000 miles across the ocean, not even knowing what was there.

Demetrios explains: “They didn’t have a television back then. They had hockey. These children play for tradition every year. It’s in their blood. And now they’re getting together… so they don’t play hockey on Christmas Day – that doesn’t happen. They have to play hockey.

“Trying to come to terms with who they were”

No one foresaw how meaningful the game would become to the larger Greek-Canadian clan; now the game is even more special because the next generation is getting involved – and, say the founders, their sons are almost more excited about the annual tradition than they are.

Stephan remembers that although they were born in Canada, the first language of his generation was Greek. He said, “When you look back you will see a light shine, and it was four children playing and trying to come to terms with where they were.”

Nick Kourles’ young son Panos explains what the Hochelaga Cup means to him: “I’ve been playing in the Cup for four years now. I see it as a time to reunite the family and look back on where we came from and celebrate that, doing something that we love.

“It kind of goes beyond the game of hockey. I have played with close relatives and people I love; I might not see all of these guys all year round, but when you start playing you can catch up with them. These interactions, that’s really what I’m here for.

Despite all the tradition and love that unites these families, the annual hockey game could have ended after the sudden death of one of the cousins ​​several years ago. Peter “Moonie” Dimas, known as the one more than anyone who helped pull off the Hochelaga Cup every Christmas day, passed away suddenly in 2011.

Greek-Canadian Peter Lentzos says, “He was a first cousin to all of us, a best friend to everyone. He was the glue that held everyone together. It could very well have been the end of the Hochelaga Cup.

“His number is on our jerseys,” explains Stephan. “There was a feeling it had to go on because he lived for it. It was his Stanley Cup… We stayed together. And we stayed together, I believe, because of him.

Nick Kourles admits that “things are changing. But in Greek culture, family is important, and it always brings the family together. “

Stephan says, “It’s the camaraderie that is the important part, the sense of family. This is the part that makes it special. No one remembers who won or lost, it’s the fact that we got together and had a great time on Christmas Day.

“To keep things going like this is sometimes a lot of work,” Nick admitted. “Get the job done, because it’s worth it. And in the end, you would miss it if he wasn’t there.

Stephan concludes: “It connects different generations of people. One day, Christmas Day, an event, a hockey game. And that’s what I think the lasting legacy of this event will be – a year or a hundred years from now. “