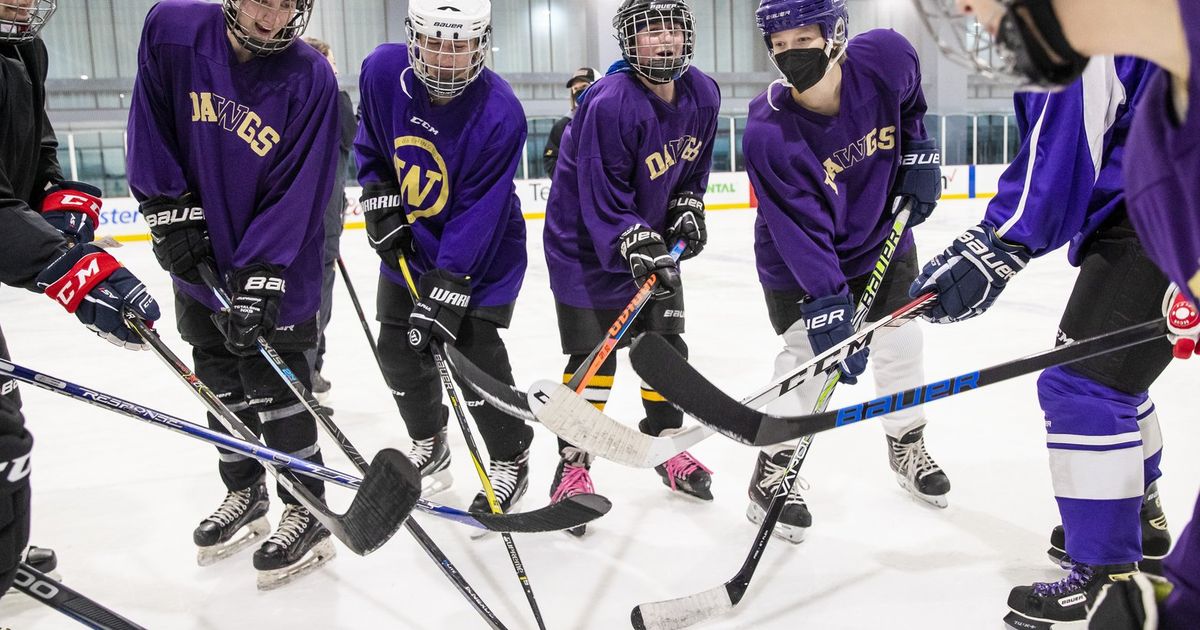 There was a moment when Mia Filardi wondered if this was going to happen.

The timing was just bad luck. Just before the start of the COVID-19 pandemic in early 2020, Filardi and Fanny Metsa-Tokila decided to start a women’s club hockey program in Washington. They missed hockey and the university had a men’s club program.

Once the pandemic hit, interest waned. Metsa-Tokila was unable to do face-to-face meetings. The campus was closed and there was no sports.

It all seemed so far away this month, when the program had 27 skaters in training at the Kraken Community Iceplex in Northgate, preparing for their first scrum on December 4.

“At least once in a practice I stop and look around and I’m like, ‘We did this,’” said Filardi. “We had so much help along the way, but we basically ended up here.”

Montana State was set to face the Huskies but had to withdraw. Filardi said UW will still play that day against a TBD team.

It’s just another challenge of building a club. Filardi, a senior, started the mission in the first year. She had played club hockey in the Boston area and missed it.

The NHL assigned a team to Seattle in 2018, which created some buzz around the city. Support for women’s hockey has also started to emerge. Filardi and Metsa-Tokila thought, why not us?

“It was difficult at first. We encountered so many things like, before anything happened in person it was really hard to represent ourselves as a club and get funding and support, ”said Filardi. “No one knew we existed. Alumni and people didn’t want to donate money to something that wasn’t real.

It seemed impossible for them to present a tangible product for more than a year, yet that is what they had to do. And now, thanks to their efforts, women’s hockey will be happening at UW.

“We didn’t have roots established around the school,” said Metsa-Tokila, a junior. “Coming back and being on campus motivates me more to do more to get things done. We want to get culture off the ground.

The project has grown from creating a space for female hockey players, to fighting for funding, to a pandemic and being part of Seattle’s growing hockey scene. Filardi estimated they raised around $ 10,000, and that number is expected to increase each season to cover jerseys, travel costs and ice time. Most of that money should come from player dues, she said.

The arrival of the Kraken helped spark interest in men’s and women’s club hockey and youth hockey. This is in part due to the construction of the Kraken Community Iceplex, Seattle’s first ice rink.

Getting the rink was vital, as a team must establish a home rink to participate in a conference. The December 4th scrum and consistent practices are part of the next step towards an application to join the American Collegiate Hockey Association within a few years.

“I just make sure they can get things like practice jerseys, ice time on the rink, and leadership meetings,” Cleeton said. “We couldn’t have face-to-face meetings from the start, so trying to get people to join us – some people had never played before, and we meet them on a Zoom. It made it difficult.

At club level, there will always be a talent disparity. Some have played high school, junior and club hockey, and others are in the process of discovering the equipment and are at a different level of skating.

For now, the club wants all interested parties to join. Cleeton estimated that seven or eight players could play in the ACHA now.

It won’t happen anytime soon. They need several different classes of players, and that happens over time. This year’s freshmen could be seniors by the time they’re ready to join a conference.

The scrum on December 4 is expected to be the first measuring stick.

“We have a lot of girls on the team who are all new to the sport,” Filardi said. “We want some kind of play experience in a safe environment for them so that we can prepare them for competitive games.”

After that, the group hopes for scrimmages with other women’s teams in the region.

The return of students to campus this year was an opportunity to get the club off the ground. Filardi and Metsa-Tokila were nervous; apart from the die-hards who had already signed up, how many students would join a club that was not even in a conference?

“We had so many people who came to see us and filled out the interest form, and it helped us a lot,” said Metsa-Tokila. “We’ve had so many girls come to us. We had a first face-to-face meeting, and maybe 35 girls showed up, and a lot of it didn’t come back, and that’s because hockey isn’t super accessible for everyone, and we recognized it. It’s a difficult thing to get girls to get involved because it’s an expensive sport.

Metsa-Tokila estimated that they have around 10 to 12 freshmen and a few sophomores, and they will be future leaders as the program grows.

“We had no experience building a team,” said Filardi. “We didn’t know how to contact sponsors or community members and interview coaches; it was all learning and planning. We figured it out as we went, wrote emails and kind of kept going. “

The arrival of the Kraken also gave them a blueprint for how to spark interest in hockey, even though the resources of the two teams are different.

“It’s not where we thought we would be for the first two years,” Metsa-Tokila said. “When we were looking for coaches, some contacted us on Instagram looking for an opportunity. They kind of came to us, and it was really great.

That’s how they found Mel White, who held a head coach position among the group of four, having just coached lacrosse at Seattle Prep High School.

Building a program, especially at the club level, involves adjustments. Getting it done in a school and town that had barely been exposed to women’s hockey was another challenge.

The university promoted the men’s program, and although it took two students to bring women’s hockey to the city, the support of the men’s program, the school and the Iceplex helped keep hockey going. female part of Seattle sports.

“We are in a good position to say: ‘This is what we have done now in the past,” said Filardi. “We are seeing what went wrong and what we could do better, and now we are on track to be much better than at the start of this year.

“We’ve been lucky with everyone here, they jumped in there and they believe in us.”