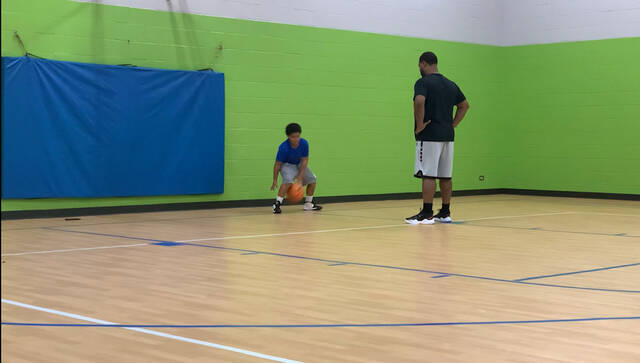 A nonprofit youth basketball team recently completed trials for their next season.

The Blue Devils started their third and fourth year boys’ basketball season with tryouts on Sunday.

“I’m super excited and pumped for the season,” said Glass. “The players have worked extremely hard to improve their skills this offseason by attending our small group practices and our open gym sessions. It will be a great season for Big Blue.

Glass created the non-profit association in 2020.

According to the website, the program’s vision is to focus on the importance of the fundamentals of the game of basketball. They combine challenging workouts and practice sessions with a results-oriented game program to enhance the development of their players.

Currently, the organization is made up of players from Edwardsville, Glen Carbon, Belleville, Collinsville, Springfield, Alton and St. Louis.

In addition to year-round third and fourth grade boys basketball, the Blue Devils program offers an open gym and practice in March and September between the fall / winter and spring / summer seasons.

The program provides one-on-one training as well as small-group skills training for boys and girls ages seven and up. During these workouts, players work on conditioning, agility, defense, ball handling, passing, footwork and other basic skills, according to Glass.

The Blue Devils program also offers Fast Break Fridays to local third-grade boys, which Glass says were created to allow boys to play five-on-five on a full court with little structure. Matches last six minutes, and the first team to score six points or with the most points after the time expires wins.

“This style of play allows the boys who practice basketball throughout the week to apply these coaching skills in a play setting and see which skills will work and which will not,” said Glass. “It’s an opportunity for the boys to just play, have fun and not have to think too much.”

“I love watching,” said Shaina Glass, wife of Ed Glass, of the Fast Break Fridays. “It literally makes a Friday night so exciting and I know the boys are looking forward to it. They go strong and have a lot of fun.

The Blue Devils rent the gym at Eden Church in Edwardsville.

Shaina expressed her gratitude to the church saying COVID made finding a gym space nearly impossible. Without the church, she said the Blue Devils program would still be just a vision.

The Blue Devils program is the achievement of a long-term Eyewear goal.

Ed started coaching his son Ean’s team about three years ago, when Ean was five.

When training ceased due to COVID, Ed took it upon himself to continue training his players.

“I decided to keep the boys involved in basketball because they were having fun and loving it,” Ed said. He started coaching the boys outside in the evenings at a local basketball court. He said when they started they had a handful of kids. After the summer, they had enough interest and players to form a team and compete in local leagues and tournaments.

The Blue Devils program now offers high performance basketball to the youth division. All of the coaches in the program played basketball collegially, according to Ed Glass, who played at the University of Mississippi until an injury ended his career. Prior to that, he played at Jennings High School where he won awards such as All-Conference Player of the Year, All-State, and All-Metro.

“We want to instill these core values ​​and skills that we have learned and pass them on to boys from an early age,” said Ed Glass. The organization encourages healthy competition by competing in practices and practices as well as results-oriented games. Ed Glass said the teams are looking to compete with the best, both locally and nationally.

“Ed’s love for the game, coupled with his basketball IQ and ability to connect with children is simply unmatched,” said Shaina Glass. “He doesn’t just worry about the ‘present moment’ of their skills and understands the importance of development. He is very proud to be the mentor of these little guys.

Training for the current season will begin on October 18.

Ed Glass said it was an opportunity for players to go head-to-head before starting the game.

“It teaches them to accept competition instead of fear of it and it’s exciting to watch,” Shaina said. “You will often hear him say, ‘We want all the smoke.’ I’ve never seen kids love a guy who works them so hard so much.

“We won’t do it if we can’t do it right,” he said. Fortunately, family support from the Blue Devils helped build the program. According to Ed Glass, several experienced fathers in college basketball and coaching basketball have stepped up.

“Their help allows us to fill more teams this season and I hope we continue to grow,” said Ed Glass. “We are building something special.”

Ed is from St. Louis and Shaina is from Cairo, Illinois. They moved to Edwardsville more than seven years ago, after the birth of their son Ean, and Shaina said they never questioned that decision.

“We have made friends that we consider to be family here and the true sense of community is more than we could have hoped for while raising Ean and Sadie,” Shaina said.

As a parent, Shaina thinks the schedule is just as important to Ean off the pitch. She explained how Ean and his teammates coordinated to wear their Blue Devil gear on the first day of school.

“I am confident that some of the friendships he has made through our organization will last him a lifetime. He’s part of a team, the Blue Devils family, ”Shaina said. “Some children have to wait until middle or high school to experience such a feeling, if ever.”

Ean is involved in many aspects of the organizing process, including providing advice on team jerseys and clothing as well as practices and drills. Shaina said that Ean has a big impact on keeping the experience fun and exciting.

“As a mom to see her commitment is inspiring and I couldn’t be prouder,” Shaina said. “As a wife, seeing how fulfilled Ed is when he trains Ean and does what he loves is priceless.”

The organization offers a team game for all levels, and there is still room for more players and coaches. Those interested should contact Ed Glass at (618) -250-7373.